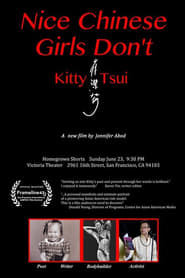 Kitty Tsui, Chinese American writer, poet, body builder, and lesbian activist, tells of her arrival as an immigrant to San Francisco and, amidst the anti-Vietnam war protests, finding her way to San Francisco State, which influenced her on her path as an activist and poet. In this first ever documentary about a Chinese American Lesbian, Tsui brings to life her coming of age in San Francisco in the 1970s, her challenges, and her continued rise to celebrity by being re-discovered by a whole new generation of Feminists.